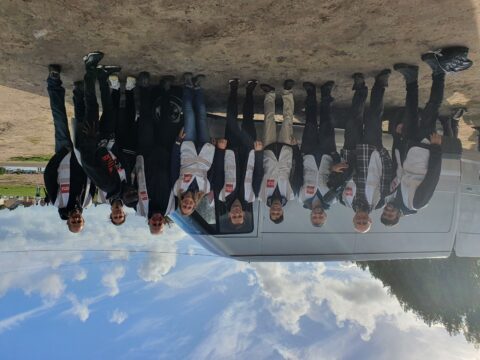 I work at a charity called NOAH, which helps people experiencing homelessness and acute poverty.  It’s part of my job to see as many of our clients as I can, and since Brexit, NOAH are supporting more and more refugees.  So, I’ve wanted to go to Calais to see the (in)famous refugee camps for a long time, and this autumn, I got the chance to volunteer in Calais with a charity called Care 4 Calais.

Our first port of call was a Calais industrial estate, where Care 4 Calais process literally tons of donations from the British public each month, to be distributed to refugees in Calais and Dunkirk. The warehouse provokes images of Woodstock – peace/love/solidarity banners everywhere.  Us new volunteers signed in on an iPad and were briefed our immediate task would be to sort a pile of donations the size of your average newsagent.

I was struck by the number of tents that are stored there – several hundred, perhaps thousands.  One of the Care 4 Calais team leaders told me they need so many because the police completely clear out the camps every two days – including the tents.

At midday we had cleared enough of the pile to be able to see the floor… and at this point another truckload of donations arrived.  However, that wouldn’t be our job, because our afternoon was to be spent at one of the camps.

Based on the descriptions in the media, I had been expecting something resembling a shanty town.  It was actually a few acres of scrubland, nestled between a residential street and a motorway.  There were a few clumps of trees, which is where the refugees pitched their tents.  The only facility of any kind was a giant water tank which a French charity refills each day.  Although the sun was shining, it was windy and cold.

This is the second largest refugee camp in Calais, where around 300 men from Sudan, South Sudan and Iran live.  During the few hours we were there, I was struck by the camaraderie between the men living there.  I had been expecting something totally different.  The guys had clearly forged strong bonds in their journeys, and there was a lively atmosphere.  Given the language barrier, I couldn’t tell whether or not the guys felt optimistic about their futures, but they evidently hold a firm hope of reaching the UK, either by boat or by truck.

Many have lost people along the way from their homelands.  One Iranian man had had to bury his wife and children, before continuing his journey.  I couldn’t imagine how excruciating that first step must have been.  The journey across the English Channel is one of the most perilous parts of the journey, and not all of the men will survive their attempt.  In this context, the camaraderie makes sense.  Far from being helpless and forlorn, these guys are resilient – they’ve seen it all.

Despite the chilly weather, the refugees had far fewer layers on than I did, which explains the long queue for the Care 4 Calais clothes van.  Each day, Care 4 Calais distribute one item of clothing – today it’s jumpers.  The van gets positioned so that the queue runs along a fence, to reduce queue jumping (AKA “zig zag”).  Volunteers like me were positioned every few metres along the queue to prohibit zig zag.  We had travelled all the way to France to show the world how to queue! 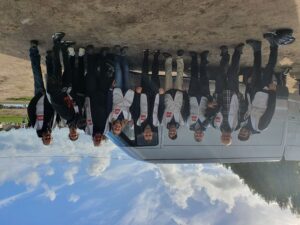 There are a couple more zig zag volunteers stationed at the sides of the van, one volunteer in the back of the van passing jumpers forward, two volunteers receiving the jumpers and passing them to the refugees, and one volunteer to call the refugees forward when it’s their turn.  There’s even a separate volunteer station for people wanting to swap their jumper.  They get three choices at first, but once they’ve taken a jumper, they can only swap if it doesn’t fit.

It’s all very well organised.  I’d say with military precision, except the atmosphere is laid back.  There was a bit of zig zag going on – on one occasion the volunteer couldn’t deal with it, so the team leader (a young woman of perhaps 25-30) was called over – and with confidence, charm, and a certain lightness of touch, escorted a guy twice her size to the back of the queue.

We set up activities – a football pitch, cricket, phone charging stations, bicycle repair (bicycles donated by a French charity), and teas and coffees, where everyone seemed to want three to four sugars.  The biggest crowd was gathered around the dominos table, where everyone looked very serious.  Up to four guys at a time played, always at lightning pace, and uber-competitive.  It offended my OCD tendencies that the dominos got thrown down rather than neatly lined up, but I learned to live with it.  Meanwhile, the guys playing football and cricket, skilled as they were, didn’t seem to care much what the score was.

One thing I wasn’t able to fathom while I was in Calais was, why the UK?  The UK government has purposefully created a ‘hostile environment’ for illegal immigrants, and severely restricted legal migration routes to the UK.  According to the UN, Turkey accepts more refugees than any other country (3.7 million), and Germany accepts the third most (2.2 million).  Last year, the UK accepted 137,000 – which demonstrates the effectiveness of the hostile environment.  A Care 4 Calais team leader told me that many of the migrants will return to the warmer environment of Germany for the winter if they can’t cross soon, and return in spring.  But she wasn’t sure why they would not avoid the dangerous crossing of the English Channel and remain in Germany, a more wealthy country than the UK.

It wasn’t until I returned home, and spoke to someone who emigrated to the UK, that I understood.  Like America, the UK is seen as a land of opportunity, and not because of the welfare state.  We know that the UK affords more opportunity for some than others.  But, if you can gain the right to reside in the UK, work hard, and find a support network, you can build a good life (with a little luck).  It’s easy to see the bad aspects of the UK from the inside, especially at present, but if we zoom out and consider the UK from the perspective of the other 8 billion people on the planet, the UK is a home to be proud of.

I’ve been working with people who are sleeping rough for years, and I’ve often noticed how much sugar they have in their tea.  Some of them have five spoons.  And they want their tea just right – give them a cup of hot milk, and you’ll be making it again.  In The Road to Wigan Pier, George Orwell made the same observation about people who survived on next to nothing, surmising that without much else to look forward to, people in poverty have a more acute appreciation for the little luxuries.  Why was I surprised that rough sleepers in London want their tea just right, or that refugees in Calais want to swap their free jumper for a different one?  That’s just dignity.